With hundreds of creeks and coves to anchor in, the Costa Brava is a destination with everything that a mariner or water sports fan could wish for as far as leisure, restaurants and specialised services are concerned.

The coastline stretches 200 km from the town of Portbou in the north to Blanes in the south, and is characterised by rugged scenery and a highly varied coastline, which is almost always steep, with high slate, granite and calcareous cliffs and deep coves with a seabed of rock, sand and seaweed, most of which can be reached by boat and you can anchor and spend the night in them.

There are also bays along the coastline, including the bays of Roses and Palamós, with long sandy beaches that are an absolute paradise for sailing and water sports fans.

The prevailing wind in winter is the characteristic tramuntana in the north and central areas, which can blow hard for several days at a time, marking the character of this coast, and, in summer, due to the south-westerly thermal wind, it is the pleasant, refreshing garbí, which picks up in the afternoon much to sailors’ delight.

In addition to good road and railway connections and the Girona-Costa Brava Airport, Girona’s coastline boasts 18 marinas, all with modern facilities and every service that any mariner mooring in them could ever want, whether for a long stay or passing through on the way to the Balearic Islands or other parts of the Mediterranean. 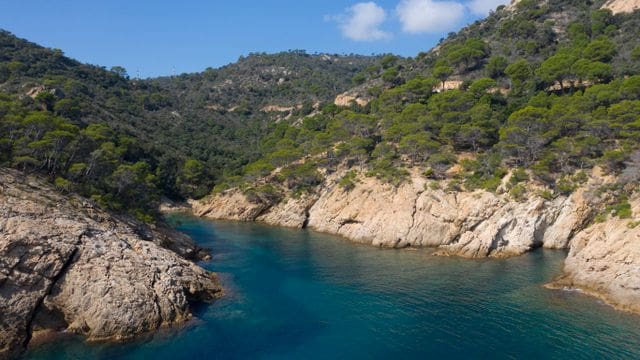