The coast of contrasts

In its last stretch, the coast truly lives up to its name of “wild coast”, the very quality that has made it so famous and loved all over the world. You only have to look south from the chapel of Sant Elm, on the top of Punta de Garbí in Sant Feliu de Guíxols on a day when a strong garbí or levanter is blowing, when the spray from the waves crashes deafeningly against the cliff face, to realise this.

The reddish rock outcrops stretch as far as the eye can see, hiding beneath their high walls topped with thick pine forests magnificent peaceful beaches, sheltered from the prevailing winds, and deep creeks cleaved in the rock, a few of which are only just big enough for a few boats.

It is the coast of contrasts. Mariners can choose between the peace and quiet of the smallest, remotest coves and wide sandy beaches, or combine both.

The southern Costa Brava is characterised by its coves, beaches and pine forests with steep cliffs.

Going south from Palamós to Sant Feliu de Guíxols the coast is made up of large beaches, only interrupted by short stretches of rocky coastline.

Punta de Roques Blanques and Torre Valentina —a sixteenth-century watchtower built as an early warning system for pirate attacks, which is clearly visible from the sea— mark the end of the beach and bay of Palamós, which are sheltered from the swell caused by the tramuntana but not from the wind, which makes it a great place for sailing sports even when the wind is strong.

The sandy beaches of Sant Antoni de Calonge and Torre Valentina stretch 1.5 kilometres along the end of the bay to the islet in the Cap Roig cove, a characteristic red rock crowned with pine trees which is an excellent viewpoint. To the south you can see the 2.1-kilometre-long beach belonging to the dynamic town of Platja d’Aro, with Port d’Aro marina at the end of it.

From Port d’Aro to Sant Feliu de Guíxols the little coves making shallow inlets in the rocks are only accessible to small boats, although larger vessels can anchor off the other two large beaches in this area: the deep Cala Sa Conca, surrounded by pine trees and split in two by a rocky island, and the majestic 700-metre-long Sant Pol beach, with its coarse sand.

At one end you can see a characteristic art nouveau house and at the other end the colourful bathing huts. In summer, at the north end of this beach anchoring is only allowed outside the large field of mooring buoys.

After Sant Feliu de Guíxols the coast is sheltered from the tramuntana by the cliffs. 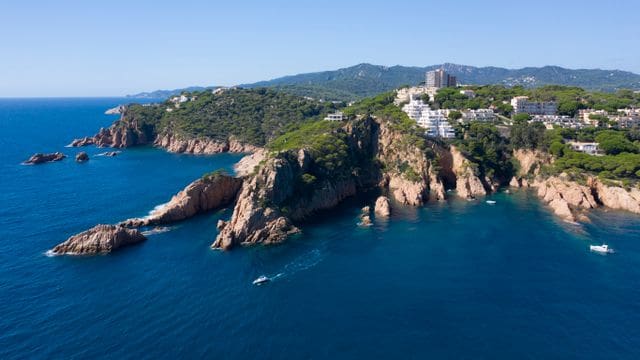 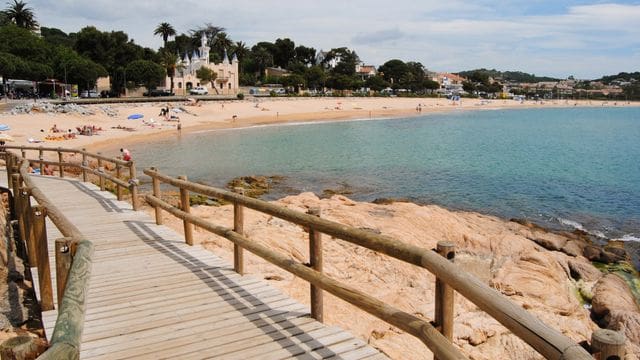 The realm of the garbí wind

The town of Sant Feliu de Guíxols and its marina mark an inflection in the meteorology. This is because once past Punta de Garbí, the site of the chapel of Sant Elm, which is the viewpoint where the Costa Brava is said to have been christened last century, you enter the realm of this thermal south-westerly wind, whereas the tramuntana loses its intensity.

It is a high and sometimes wild coastline of red cliffs covered in pine and holm oak forests that drop vertically into the sea.

The seabed of its coves is at times pebbles and rock and at others coarse sand. Many are difficult to reach by land, making them ideal for those looking for uncrowded coves. In any case, they are all safely sheltered from the tramuntana and most from garbí, as well.

After passing Punta de Garbí you’ll come to Cala del Vigatà, which by land can only be reached on foot and is recommended for mooring on ecological buoys. The first cove where you can stop off sailing south is Cala Canyet. Although it isn’t very deep, you can drop anchor in 4-5 metres of sand and it is sheltered from the tramuntana and north-easterly winds.

Between Cala Giverola and the town of Tossa de Mar there are a number of underwater caves. 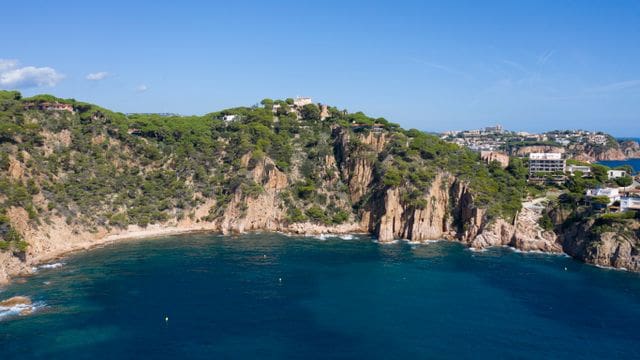 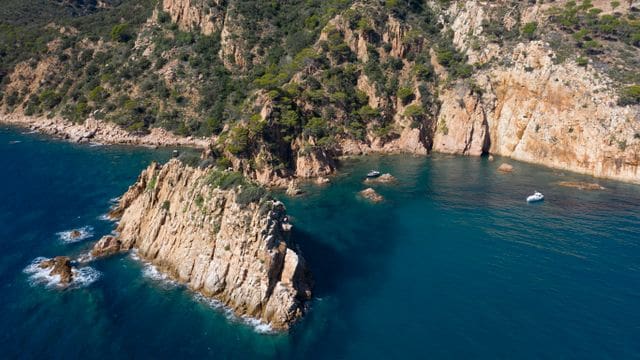 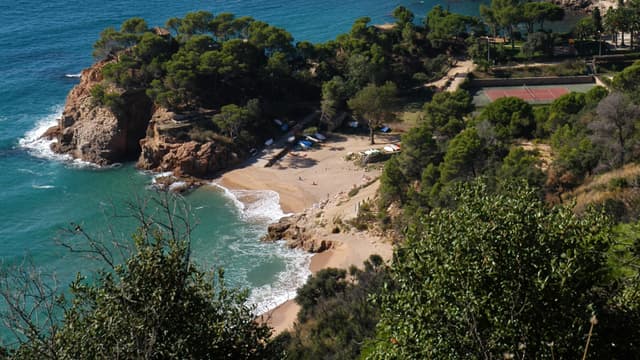 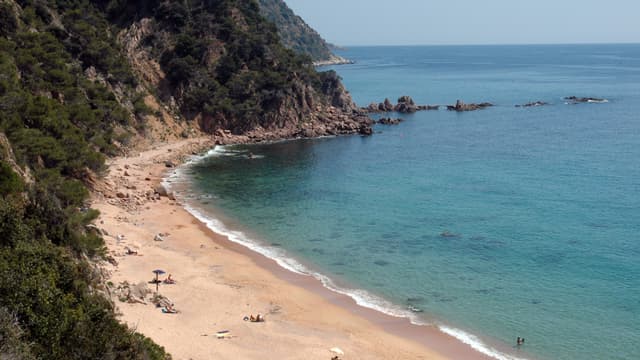 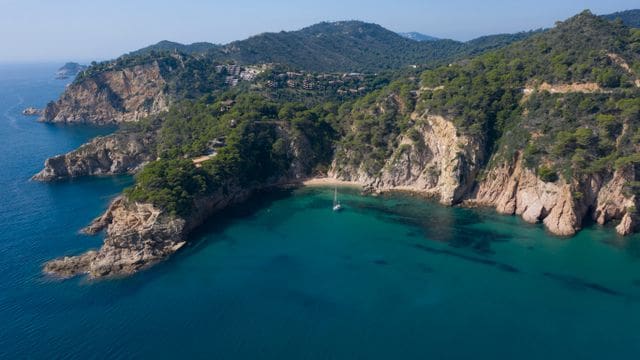 The so-called Cala del Senyor Ramon, further south, is a beach with a magnificent seabed rather than an anchoring place, although some small local boats go there to spend the day.

Cala de Salionç, with its clearly visible white tower and its chapel of Sant Grau, is only suitable for anchoring if the wind is coming off the land, so if you want to drop anchor it’s better to head for Cala Futadera, just under two miles from Cap de Tossa if the wind is garbí. It should be avoided by northerlies and in this case it’s advisable to head for nearby Cala Giverola, which is only separated from the former cove by a small spur. This cove is sheltered from the tramuntana and provides anchorage in depths of five metres.

The so-called Cala del Senyor Ramon, further south, is a beach with a magnificent seabed rather than an anchoring place, although some small local boats go there to spend the day.

Cala de Salionç, with its clearly visible white tower and its chapel of Sant Grau, is only suitable for anchoring if the wind is coming off the land, so if you want to drop anchor it’s better to head for Cala Futadera, just under two miles from Cap de Tossa if the wind is garbí. It should be avoided by northerlies and in this case it’s advisable to head for nearby Cala Giverola, which is only separated from the former cove by a small spur. This cove is sheltered from the tramuntana and provides anchorage in depths of five metres.

The bay of Tossa de Mar

Tossa de Mar has no marina and nor is it a recommended anchorage, although it is a superb spot to stop momentarily. You can anchor in the bay by tramuntana, off the beach in some 9 metres of sand, or under Punta de Morro de Porc, though the best place is south of Sa Palma Island, even though in summer it’s packed with small local boats and you should watch out for shoals. The channel between the island and mainland is not advisable.

It’s well worth going ashore as Tossa is an old enclave, occupied since pre-Roman times. The Roman Turissa became a town which was first mentioned in the ninth century with the name of Tursam in a donation to the counts of Barcelona, who in turn handed it over to the Benedictine monastery of the city of Ripoll, in the Girona Pyrenees, in the tenth century. 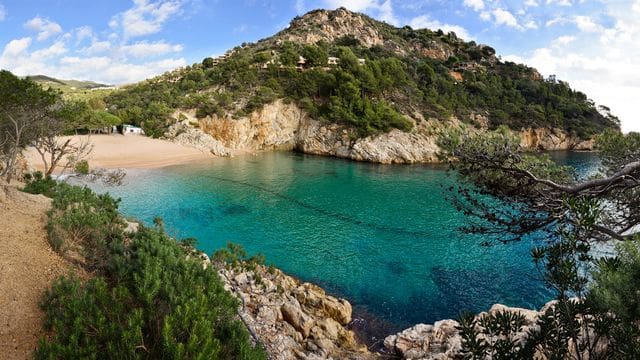 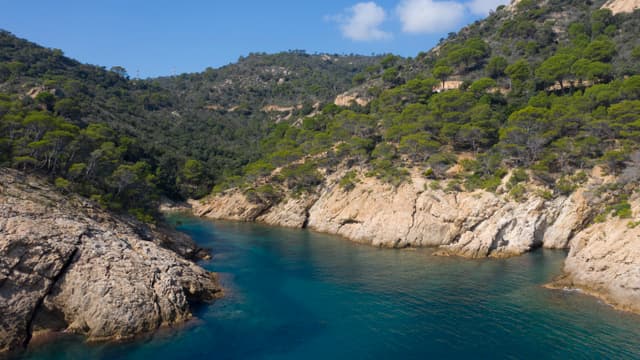 The bay of Tossa, with its walled old town, is one of the most attractive bays on the Costa Brava.

From cove to cove

Going south from Tossa de Mar, before reaching the cove and beach of Canyelles, with its pretty harbour where the little fishing boats still tie up, there are several coves, like Morell and Llevador, which are a great place to spend some time, before seeking shelter in Canyelles marina itself.

In Canyelles, you can only anchor outside the buoy field and it is very exposed, making it recommendable to find a mooring in the marina if you want to visit the surrounding area.

The bay of Lloret de Mar has a long beach in front of the town which is very busy, but not suitable for anchoring except on the northern tip, where there is a small cove below the Castell d’en Plaja and the Iberian settlement of Turó Rodó, a very popular spot in summer and highly recommendable in fine weather. You will have to go on to Blanes to find the first stopping place, Fenals beach, even though you will need to exercise precaution due to the shallow sandy seabed and to the fact that there is no shelter from winds here.

Sa Boadella, Santa Cristina and Canyelles beaches are very popular because of their turquoise waters and sandy seabed. 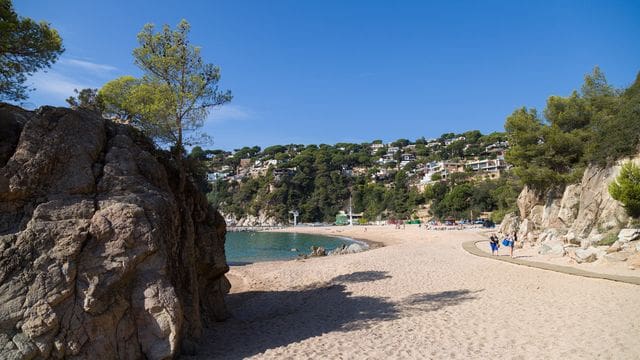 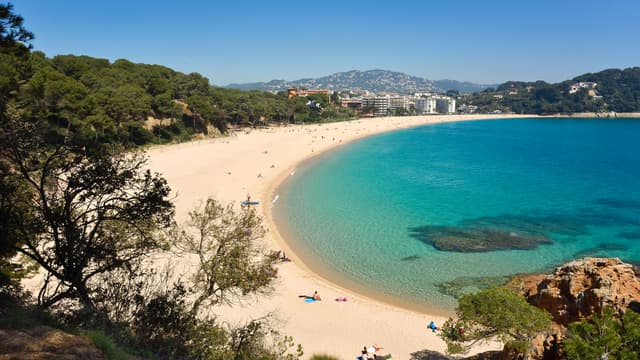 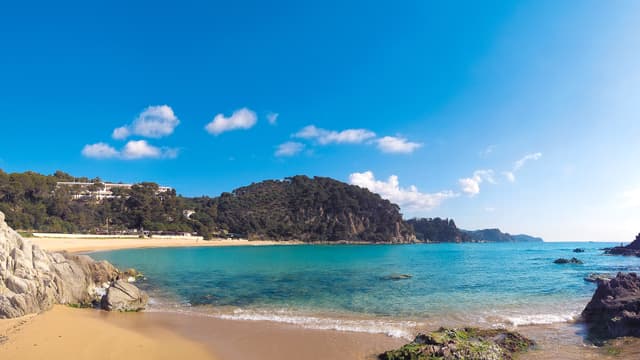 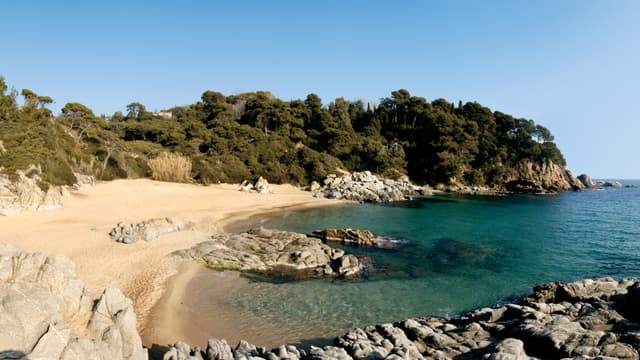 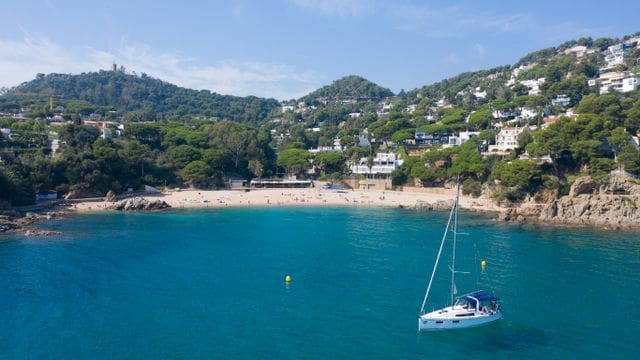 You have to go on towards Blanes to find the first place to stop, Fenals beach, although you should watch out for the shallow sandy seabed and the cove is very exposed.

As far as Blanes you’ll only find very well-equipped beaches which, although you can anchor in them, are very exposed to levanter and south wind. By north wind, as they are in an area of low hills, they do not provide shelter from strong tramuntana, although again in this zone it is not as frequent or as strong as in the centre and north.

These beaches are Sa Boadella, Santa Cristina and Treumal, Cala de Sant Francesc where you can anchor on sand off the beach, and the small, secluded Cala de Sa Forcanera, beneath the Marimurtra Gardens and the Linné temple, which you can only reach by sea, since on land you have to cross private property.

Blanes marina is the beginning and the end of the Costa Brava, and the imposing Sa Palomera rock, connected to the land by an isthmus of sand and earth, is the point that marks the line where everything begins and ends for boaters who have spent their holidays in its destination or who are passing through this impressive coastline.

The imposing Sa Palomera rock marks the southern end of the Costa Brava.

There are four main botanical gardens not to be missed on the Costa Brava. They display plants of great value, a unique explosion of unparalleled aromas and colours, with breathtaking views of the sea. Each one is an oasis of pure nature inviting visitors to take a peaceful stroll.

The Cap Roig Gardens in Calella de Palafrugell, created by Nicolai Woevodsky and his wife Dorothy Webster in 1927, are home to over 1,000 species of plants. One of its symbols is the castle built of local ferruginous stone and it is one of the gardens with most varieties in Catalonia. There are five guided visits to the gardens and in summer there are exhibitions, the international festival of music which bears their name and numerous cultural events.

The Santa Clotilde Gardens are situated in a very beautiful setting, on a cliff on Lloret de Mar’s coastline. They were designed in 1919 by the architect and landscape gardener Nicolau Maria Rubió i Tudurí and are an example of the spirit of the Noucentisme movement in Catalonia. They stand out for their clear Italian influence, in line with the architectonic setting. The gardens feature several marble sculptures that contrast with the wide variety of plants.

The Marimurtra Botanical Garden is a balcony over the Mediterranean for Blanes. It was created in 1921 by the German scientist Karl Faust, and years later it was to become one of the most important gardens in Europe. It houses over 4,000 plant species from all over the world, most of which are exotic, including examples like the Chilean wine palm, bamboos and African trees.

Ferran Rivière de Caralt was the creator of the Pinya de Rosa Botanical Garden in 1954. Its 50 hectares of garden contain almost 7,000 species of different genera brought from their natural habitat, plant nurseries and private collections. Of particular interest are the collections of aloes, agaves, yuccas and opuntias, many of which are considered to be the best in the world.

The botanical gardens are breathtaking clifftop viewpoints that dominate the horizon. 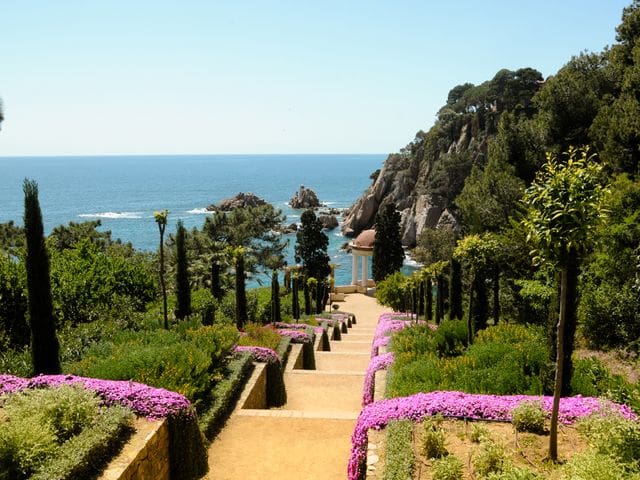 Marimurtra is a balcony over the Mediterranean for Blanes, housing everything from spectacular species to artistic African trees. 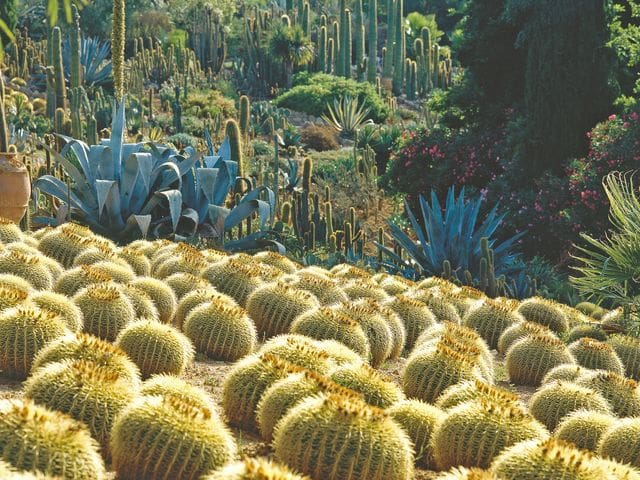 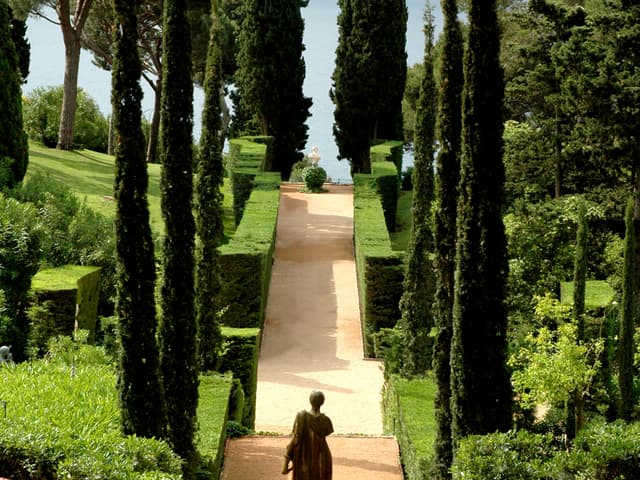 The clearly Italian style, in line with the architectonic setting, determines the beauty of this place. 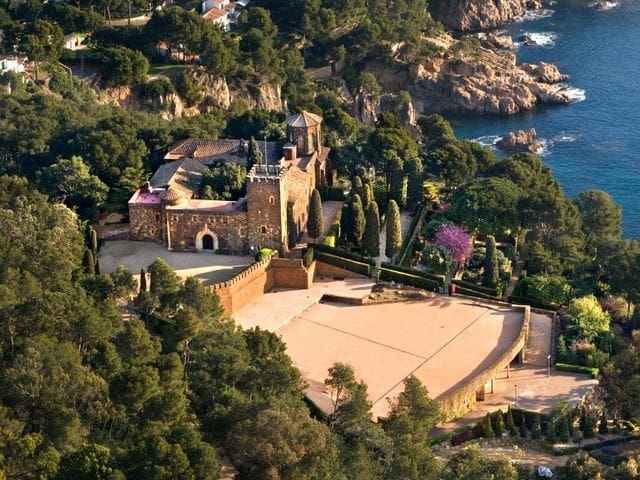 Cap Roig Gardens are a top venue for cultural occasions, the international music festival and other events.